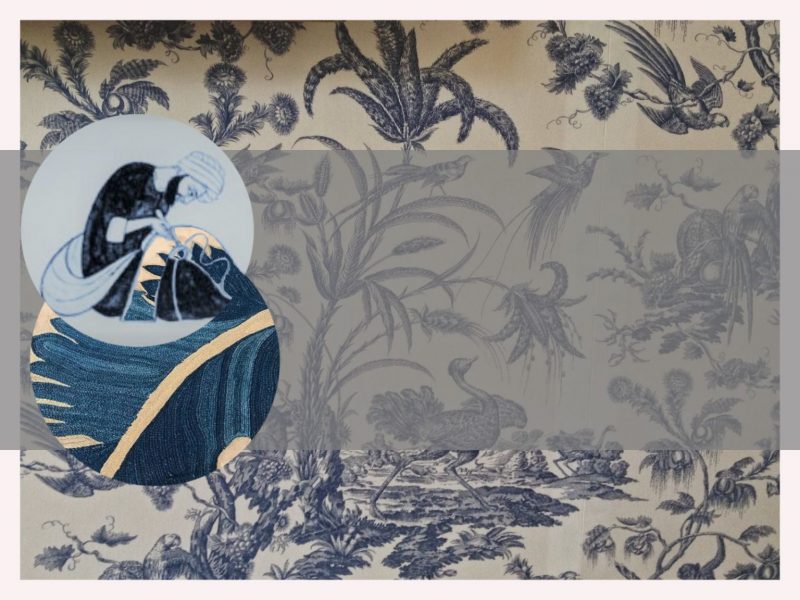 Textiel Factorij has set up a collaboration with fashion designer Karim Adduchi. Together we will explore 18th century Indian embroideries, which were worn by women living on the canals of Amsterdam.

Karim Adduchi together with masters in embroidery will develop contemporary interpretations of embroideries which were once made for the Dutch high society.

Mochi embroideries were done by the cobblers. The name mochi derives from the name of the community. Originally the mochi’s were shoemakers and their leather shoes were embroidered. This type of embroidery is done using a cobbler needle, which is a kind of hook needle, locally called ‘aar’. Hence the embroidery style is also called aari embroidery. It requires considerable skill and extensive practice since the thread is introduced from below the fabric. The technique of embroidery is a chain stitch. The embroidery mainly has designs with flowers, floral borders, birds, human figures and hunting scenes of royalty. Some pieces also show unexpected influences such as 16th century Dutch botanical paintings first seen in the Mughal courts. Mochi embroidery was earlier done on fine silks and cotton with floss silk threads.

Almost extinct
Nowadays, the traditional Mochi embroidery is almost extinct. However, there are various craft communities in Gujarat, who create the most marvellous embroideries. These embroideries have their roots in the ‘Mochi’ community and artisans have inherited and integrated the Mochi embroidery style into their own traditions. The images depicted by the skilful artists draw inspiration from their daily household chores and local flora and fauna like peacocks, flowers and camels.

Contemporary use of crafts

We will among others explore the dress collections of Rijksmuseum, donated by the Six family and investigate the embroidery patterns and traditions. New interpretations and designs using intricate embroideries will be created. The results of this artistic endeavour, our shared textile history and cross – cultural exchange will be shown in an exhibition. We will explore the fine chain-stitch embroidery, associated with the Mochi community of Gujarat, which were made for export.

This artistic exploration is generously supported by Stimuleringsfonds.