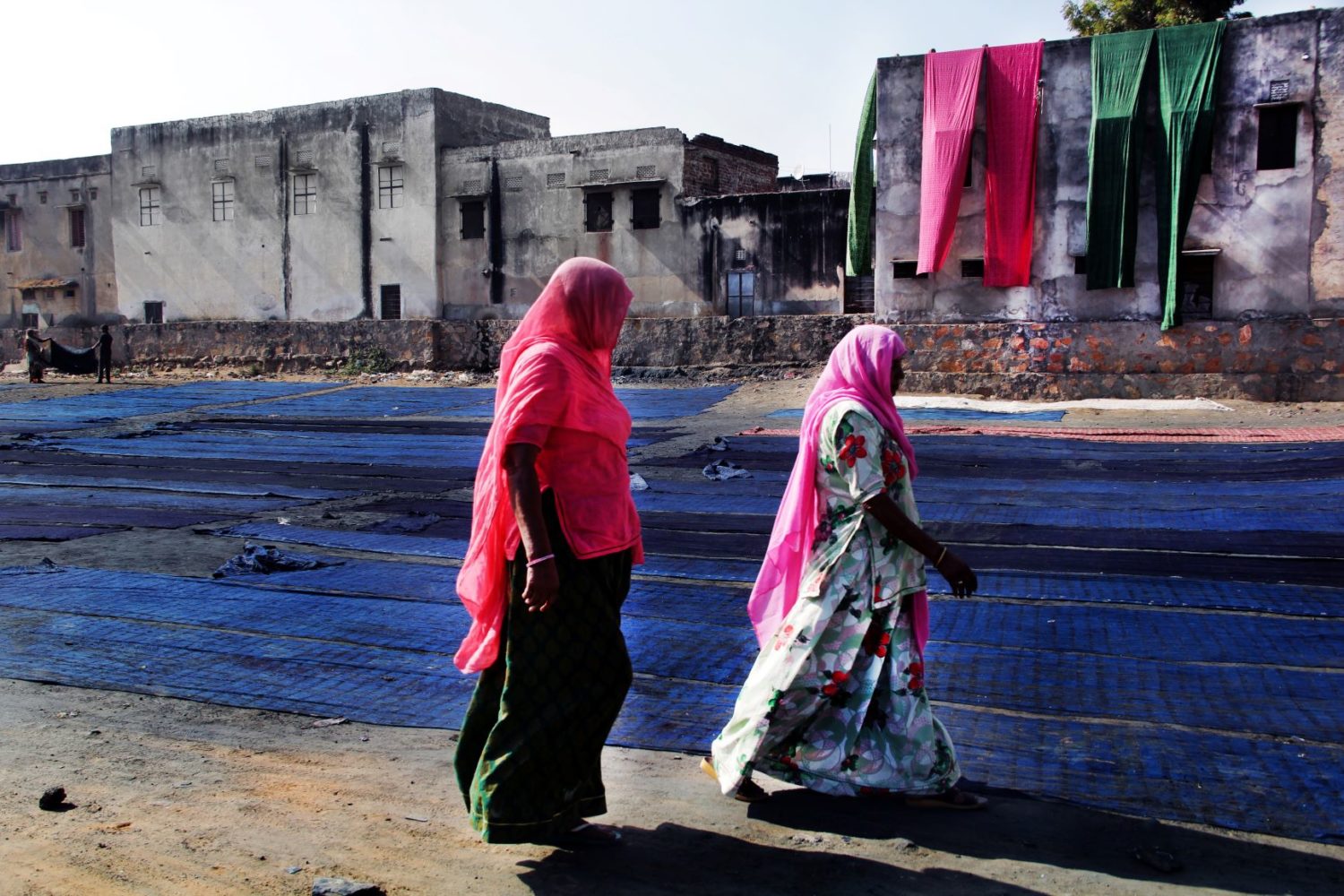 A pleasant conversation with Willemien from Crafts Council NL

Now that we all have to take a step back and many projects are postponed, the Crafts Council Netherlands continues to inspire us, by talking with various makers. We can read about what they are up to, learn about their sources of inspiration, dreams and challenges.

My name is Lipika Bansal, I am a social designer. I question certain issues in society and address them with the intention to bring change. One of the projects I conducted in India, was in workers-settlements in New Delhi. Together with young women who are among others, responsible for the water in the area, I researched how they look at the relation between water and health. I called them water managers because. Together we mapped their activities and experiences by sharing stories in language and image. We developed the data into exhibitions and spoke to other women in the community. This increased their self-esteem and confidence and made people from the community more aware of the responsibilities of these young women. They started to look at their own activities differently, awareness arose.

Where does your interest in social design come from?
It is in small things that can have a big impact on a human life, that’s how I was brought up. My parents started a hippie shop in the Nine Streets in Amsterdam in the 1970s. They first imported clothing and jewelry from India, Nepal, Sri Lanka and Afghanistan and slowly grew into a wholesale company in interior and design. From an early age they took my sister and me to India. We visited family there, but we also visited the workshops and studios. We saw where the things were made, how people lived, what they could do. Especially the Indian textiles appealed to me. Yet I first followed a different path, I did studies in the sociology of technology. ‘

When did you start with the Textiel Factorij?
It must have been about eight years ago that I saw a children’s jacket and a baby cap made of chintz, from Marken in the Tropenmuseum at the India department. I was amazed that this typical Indian fabric was used in Dutch regional dresses, and to learn about the historical connections between our countries. I started to study chintzes, I collected stories, did research both here in the Netherlands and in India. Then the idea for Textiel Factorij was born. Making chintz requires complicated, specialized techniques, dye baths and processes. It was extremely popular in the Netherlands in the seventeenth century because it had an unprecedented design, was colourfast and washable; an innovation at the time.

Can you tell us more about Textiel Factorij?
Textiel Factorij is an artistic exploration about the textile trade between India and the Netherlands and its influence on the use, color, design, motifs and patterns in the seventeenth and eighteenth centuries. There was an important trade route between India and the Netherlands, especially Gujarat and the Coromandel coast were important areas where the VOC had set up trading posts and factories for cotton, indigo and silk trade. I wanted to analyse these historical links from a contemporary perspective, set up knowledge exchanges and establish long-term collaborations. I initially focused on block printing. So far, 35 artists, designers and artisans have been to India to work with master craftspeople. Indian master craftsmen have also come to the Netherlands to conduct masterclasses. The artistic endeavours have been exhibited at the Fries Museum, the Zuiderzeemuseum, the Museumfabriek, and two smaller exhibitions at the Lloyd Hotel. We are now working on bringing the exhibitions to India. It is already partly financed. I think it is important for the perception of one’s own abilities that the Indian artisans see their work presented and represented on a different level. It is important that stories are connected and told from different (historical) perspectives.

What are challenges in your work?
I was once in a wood workshop in India where artisans were making small hand mirrors, they asked me what the people there, they meant in the Netherlands, do with these products? There is a disconnect between what we (the West) demand and what these people have to produce there. I aim for collaborations based on equality, which I believe is only possible by meeting each other, telling each other stories, eating and working together.

How do you see the position of the maker in the future?
In India, craftspeople are often not valued for the skills and are seen as laborers. Although 200 million artisans depend on their profession, the number is also decreasing there because of schooling and also because it is so hard to earn a decent living with it. In this time of corona you are supposed to be lucky if you live in the countryside because there is still food there, people in the city die of hunger, but when they return to their families in the countryside, they may carry the virus with them. Healthcare in those areas is very minimal. I worry about that yes. The difference between rich and poor is so big. I did a fundraising campaign for a community I often work with, it was successful, they were so happy, but what did I actually do? I’m in my nice house here, with all amenities right next door.

What is your favorite craft from India?
My favorite craft, is that really necessary? If I can only choose three, then it is embroidery, metal craft and weaving. The weaving technique used for the sari is so beautiful. The sari is a six-meter-long piece of cloth that women drape around their bodies, it is really a national costume that is worn differently from region to region. Each state has its own weaving technique, materials and patterns. Everyone in India knows how to wear a sari. All my aunts used to wear a sari when we were with my family in India, now they wear leggings. I have received beautiful saris from my mother that I wear on special occasions, but certainly once a year during Diwali, the Indian festival of lights.

What are you currently working on?
As a follow-up to Textiel Factorij, I have been immersing myself in embroidery techniques from India for a while, and in particular the Mochi embroidery technique, also known here as tambouring. You work with the luneville needle, a kind of crochet hook, through which you can work the fabric. From the eighteenth century, women and men of the canal belt wore this kind of finely decorated clothing. This traditional embroidery stitch from Gujarat has disappeared, but there are still several stitches that are influenced by the Mochi embroidery technique. Although nowadays it is called Aari and not Mochi. Just as with the printing techniques, I want to establish long-term collaborations with Dutch designers so that contemporary interpretations are conceived through knowledge exchange. This first exploration with embroideries is with fashion designer Karim Adduchi.

How do you see makership in the future?
I certainly see a future for making. In the Netherlands new crafts have emerged because new people from other countries and cultures bring other techniques. Unfortunately, it is sometimes very complicated and bureaucratic to acquire acknowledgement. Formal knowledge is still called upon, but the knowledge of those who come is often informal, passed on from father to son or mother to daughter. I would like us to look at these traditions from their perspective and how this, tacit knowledge transferred. Also that we should be curious about the stories and techniques that these people bring. Open up and listen to other people’s stories. In India, crafts will also continue to exist, but it is difficult. One of the goals of the Textiel Factorij is to stimulate long-term collaborations, only then can these ancient techniques survive. That is one of the reasons why I set up Mumby, a small-scale, sustainable kids design label. But also the confidence of the artisans themselves is required, the idea that their children can continue the tradition and earn money with it. Weavers I work with, such as Shamji and Dayalalji, tenth generation weavers, have small looms for their children and grandchildren so that they can learn all the techniques in a playful way. Even though weavers have a hard time, the children learn a skill on which they can always rely.

A good example of collaboration is the making of blocks that are used for printing. Carving is very time consuming and complicated artwork. Sujata Majumdar and Simone Post, designers of Textiel Factorij, developed new blocks with a CNC machine. The machine did the rough work, then the block carver finished the block. That could be progress, because you can work faster, and it could generate interest among young generations. The nice thing is that we discovered that the completely hand-cut block prints are the most beautiful, absorbs the colors best and were chosen by everyone as the most beautiful pattern. The master’s hand!