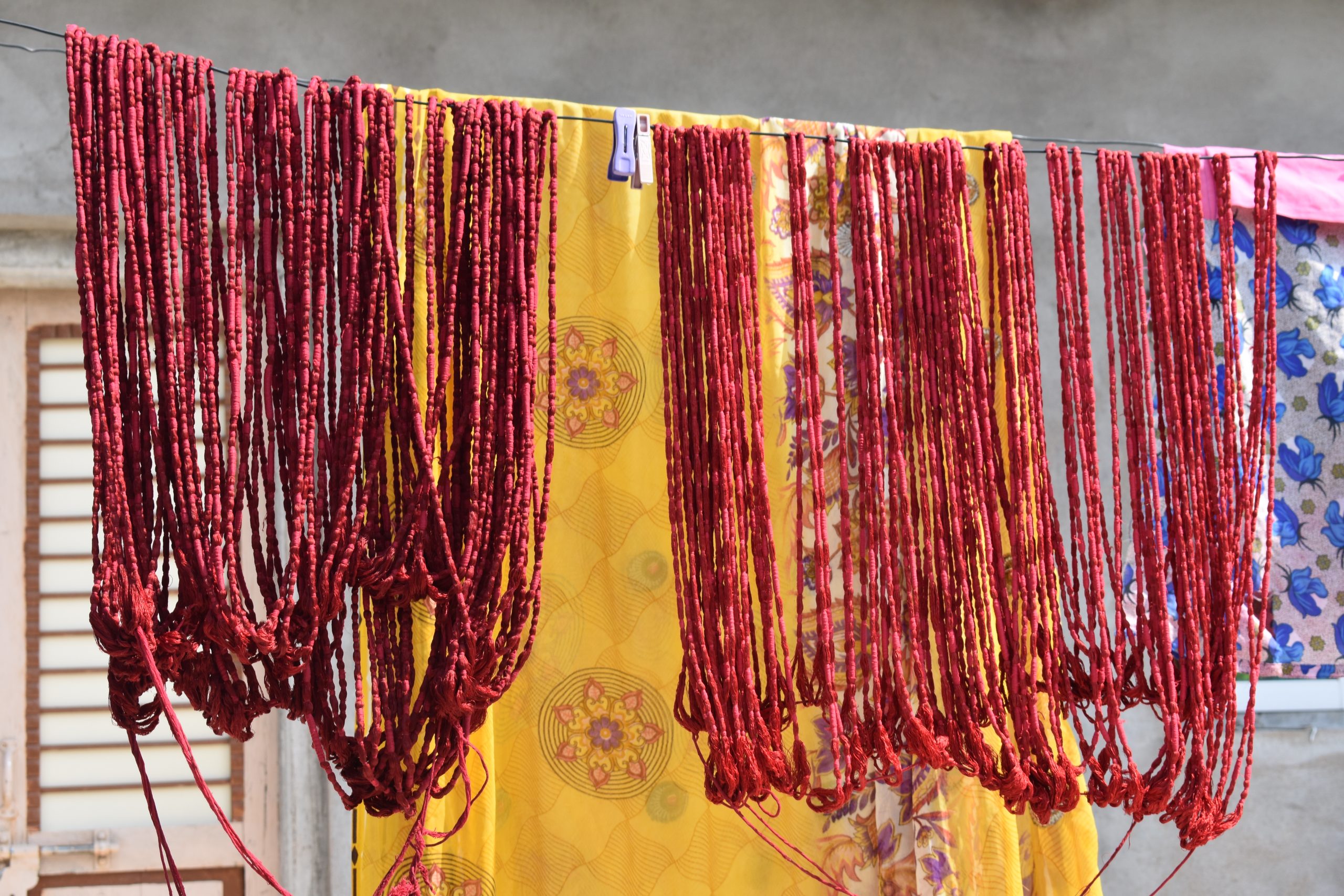 The Making of a Ceremonial cloth

By Aastha Jain and Sakshi Mundada

Every Indian textile tradition is a culmination of centuries of practices kept alive by the most persistent men and women, the artisans. One such great tradition is that of a double ikat woven silk fabric known as Patola. Patola or Patolu is a Gujrati word originating from the Sanskrit word patta meaning silk. Through centuries this fabric has occupied a status of traditional, religious, and social significance.

The process of weaving Patola is highly complex and requires the most skilled artisanal capabilities, meticulous calculations, and a considerable amount of time. One saree can take anywhere from about six months to a year to be woven. The warp and weft both are separately tied and dyed, in such a way that they come together to form intricate patterns involving complex motifs like peacocks, parrots, and elephants. To achieve these motifs requires a level of precision and planning that is unimaginable to people like you and me. While one of the variants woven in Rajkot, single ikat, is vertically-resist dyed, traditionally Patola, double ikat, is both horizontally and vertically resist dyed. This process of double ikat is now performed only in a handful of countries and none can compete with the precision of Patola. It is this process wherein lies the beauty and value of the textile.

The origin of Patola is shrouded with multiple narratives and stories. The absence of any reliable written record leaves us with passed-down tales to understand the source and early evolution of Patola as a craft. The traditional Patolu weavers belong to the Salvi community. Today only a handful of these artisanal families survive.

One narrative speaks of the eleventh-century Jain king Kumarpala (1143-1174) who insisted on wearing Patola fabric on his daily temple visits. These Patolas were being created in Jalna, a town in present-day Maharashtra. On being informed that the ruler of Jalna, used these fabrics as bedsheets before sending them to other aristocrats, he decided to bring the 700 Patola craftsmen and their families to Patan and said to have worn a new Patola every single day to the temple.

References of Patola started appearing in the writings of multiple eminent Gujarati poets and writers since the 12th century, establishing that the fabric had gained popularity and recognition in the region. “Lais Patola sar sari nahi pehru” an excerpt from a poem of Prem Chand, translating into ‘bring me Patola or I will not wear a saree’ highlights the importance and admiration Patola had gained amongst the masses.

Over centuries this textile has been unmistakably woven into the social and cultural fabric of the region. This fabric holds value across a wide range of cultures and has found a place of reverence in the most sacred of rituals concerning birth, death, marriage, and everything in between.

In Gujarat, the land of its rise, specific designs of Patola have gained importance among different religious groups such as Nagar Brahmins, Jains, and Vohra Muslims. The extensive use of red color is said to represent the mother goddess worshipped by the Jain weavers. The fabric also became an integral part of the stridhan or the bridal trousseau. Historically, Patola having patterns with dancing figures, parrots, or elephants were given to expectant mothers during their shrimant ceremony to protect the mother and the unborn child from evil. Worn-out saris were re-used in different ways like quilts for a newborn or were tucked into a baby’s cradle as they still retained their power. Practice of these crafts varies regionally. It is believed that the interconnected routes of the Indian spice and textile trade brought the famed textile of Patola to the important trading port of the Malabar Coast. In Kerala people attribute medicinal and healing powers to Patola.  Locally known as Viralli Pattu, these fabrics have been used in rituals, adorned by the priests. Depiction of Patola-like textiles on multiple murals of Hindu temples has also been found. This cloth serves as either a backdrop of the deity or as clothing of the deity itself. In the Vohra, or Bohra community who are Ismaili Muslims and are said to maintain close contact with the Hindu weavers,the mother of the bride wears a patola saree. This ritual visibly establishes the fact that textiles have been crossing religious boundaries and taken on newer meanings since times immemorial.

Patola had been an important textile trade from as early as the thirteenth century. They were exported to Indonesia during the Majapahit period where they were also known as tchinde ( 1293 – 1500 CE)

Later European powers like the Portuguese followed by the Dutch East India Company or the Vereenigde Oost-Indische Compagnie (VOC) established bases in South and Southeast Asia, taking over the textile trade of the region. By 1674 the VOC had gained a monopoly over the trade of Patola. Indian Patola was integrated into the political and social structures in many parts of Asia. It was a prestigious commodity used as a gift between rulers or by tradesmen in return for concessions, symbolizing friendship and interdependence. It was a very valuable currency in the spice trade, often exchanged for the rights to acquire spices, sandalwood, and other natural resources.

Significance in the Indonesian archipelago

There was a difference in the technical qualities between Patolas created for domestic use and the ones woven for export. Heavier threads and looser weaves were created for the export of cloth resulting in lesser costs for the manufacturer. Export Patola also existed in a greater variety of sizes as compared to the domestic market.

Over time the Patola weavers started weaving specific designs for the Southeast Asian market which gained new meanings, such as the majestic processional elephant design that was in demand amongst the royalty of the region.

Patola gained ritualistic connotations in various parts of Indonesia. The cloth was associated with rituals related to well-being, it was also used to wrap the dead during burial in death rituals. The craft has also been attributed to have protective, healing, and magical powers. In Bali the geringsing and Patola were said to have the power to protect the wearer in combat as well as from illness. In Malaysia, the fabric was known as cendai and was an essential part of the royal dress. It was used as wall hangings for rituals and as canopies for processions.

The story of Patola is thus a tale of its ability to become an object of reverence in every land it touches. It is the tale of these artisans who conjured such a fabric fit for gods. It is the tale of all those people who saw a higher power in the weave of the textile. The extremely complicated process of creating this fabric is a testament itself to our abilities as humans. And that is why a product created out of such skill and persistence can never remain as just another piece of fabric. It is thus the effort of the artisan who creates it that makes Patola sacred.