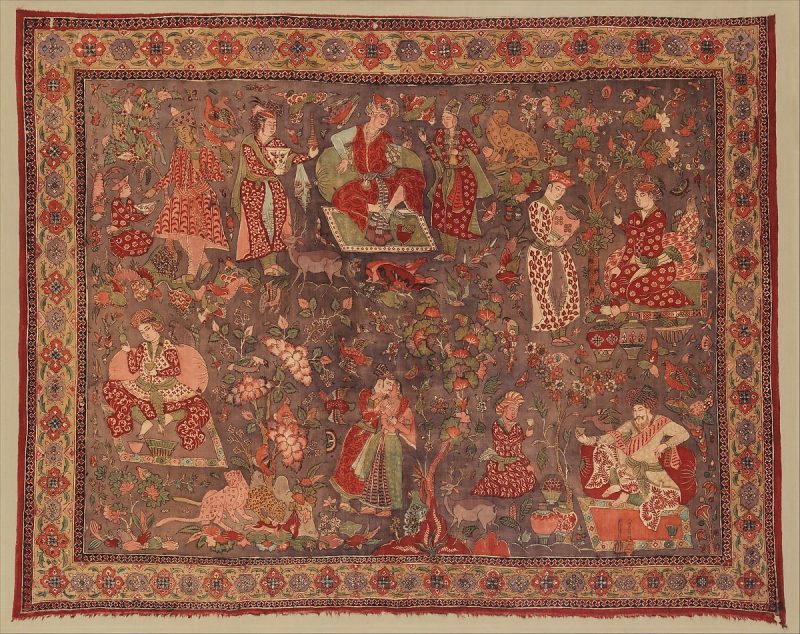 Journey of Kalamkari : From a storytelling art to a global textile

By Aastha Jain and Sakshi Mundada

Kalamkari is derived from the word Qalam, which is Persian for ‘pen’. A tool that was yielded by a nomadic storyteller from India thousands of years ago. It is with this pen that he drew out the epics he had narrated all his life. He illustrated the gods, painted the stories of their lives and in doing so created a piece of cloth that would go on to influence the world in ways no one could imagine. What started as a representation of mythological and religious beliefs of Southern India, over the years became an object of desire across the oceans.

Kalamkari is a 3000 year old traditional Indian art of naturally dyed, hand painted, narrative textiles. Fabric samples of Kalamkari were first found at the archeological sites of Mohenjo-daro in the Indus Valley civilization establishing it to be a craft as old as the ancient civilization.

As the years passed, Kalamkari or locally called as ‘Vrattapani’  gained popularity as a temple art and was respected and appreciated amongst the rural communities. Much later in the history of this textile, it was the Mughals who provided patronage and promoted this craft throughout the Golconda and Coromandel province. The skillful craftsmen, known as Qualamkars, gained respect and importance along with the textile itself.

In India, Kalamkari can be identified as two popular styles – Kalahasti style and Machilipatnam style. While both these techniques share a common ancestry, they have evolved into individual storytelling crafts with distinct subjects, visual aesthetics, audiences and printing/ painting processes.

Kalahasti style depicts narratives from the age-old folklores. Due to its origin from temples it holds a deep religious sentiment. Stories from ‘Puranas’, ‘Maha- bharat’, ‘Ramayan’ are laid down  on horizontal panels. The text used to identify the paintings was written in Telugu language. The cloth was coloured as per context to convey emotions. Based on the personality of the characters in a narrative, colours were assigned. Originally, started as a hindu craft and later patronized under Muslim rule,  kalamkari grew as a secular craft in the subcontinent.

The process of hand painting in this style is practiced using a brush fashioned out of a bamboo stick as opposed to the Machilipatnam style in which motifs are essentially printed with hand-carved traditional blocks and only the intricate detailing painted by hands.

Kalamkari is a craft that is completely dependent on nature. It is essentially a complex twenty-three step process which results in a textile with brilliant colouring, undimmed by repeated washes, a light texture, and strengthened durability. Almost all of the steps include locally sourced, natural materials. Traditionally, the Indian craftsman used dyes from sources like plants; seeds, flowers, roots and minerals obtained using native recipes and their knowledge of elaborate chemical processes. Unexpected materials like cow dung and beeswax were used for processes like bleaching and resist dyeing. The result was thus a testament to the ingenious resourcefulness of the artisan along with his skill. One can observe the inherently scientific nature of the craft by observing all these processes. A testament of the pascal’s law, cloth is washed in running water such that whatever is extra comes up.

Trade with the West

From the 16th century, as the Indian subcontinent began attracting the attention of western trading companies, Kalamkari quickly found its way to become one of the most sought after commodities. With India becoming the nexus of textile and spice trade across the world, Kalamkari textiles gained the position of a trade currency. The Southeast Asian and Indonesian traders demanded the textile for ritual and ceremonial use as it became an important part of the cultural fabric of the area.

Following the Dutch, Portugeese and British invasion of India, Kalamkari spread across the globe through their trade channels. Portugeese called it Pintado, while dutch, shitz and british chintz. The vibrant jewel-bright colours became the fashion for daily wear in England.

Chintz: An adaptation of Kalamkari

“Chint” in the language of the land, Hindi, means variegated. Historically, chintz referred to plain weave, calico cotton which was hand printed, mordant- and resist-dyed in brilliant, vibrant patterns of exotic flora and fauna on neutral, light backgrounds.

The story of the trade of Kalamkari is closely related to its development. Chintz, is thus an adaptation of Kalamkari created specifically as a trade textile. Initially, Chintz was manufactured in India and exported to different parts of Asia. The first samples came to Europe in small quantities via Dutch and Portuguese traders in the 16th century. While the inspiration was Indian, the local designs were appropriated with floral embroidery type patterns for the European market developing a new “exotic” style.

When word spread that Queen Mary had used calicoes for decoration, the use for hangings on walls, floors and furniture became widespread. As the wave spread throughout the western world, everyone caught on, from the fashionable circles of London to the farmers of  Holland. It quickly became ‘the’ textile to own.

However the absolute craze for these fabrics from India created havoc within the European textile businesses. In the 1670s complaints had started by the English weavers about the influx of cotton textiles from India. Over time, situations worsened as the English weavers mobbed the House of Commons in a mass protest against these goods. Such was the power these textiles had accumulated over years. Ultimately the parliament levied a heavy import duty on chintz.

Decline in the Indian subcontinent

Over time the craft of Kalamkari started declining in the 18th century. This decline is attributed to the establishment of the European cotton industry in India. Artisans now started working for British companies and the master craftsmen died without passing their trade secrets. The period after 1924 saw the near disappearance of the industry at Masulipatnam. The Kalahasti temple patronage declined and the local landlords lost their wealth. Later, in 1952, in the independant India, the craft was revived not just at Masulipatnam but across the country with the help of the All India Handicrafts board.

Kamaladevi Chattopadhyaya founded the handloom board and along with Jonnalagadda Laxamaiah and Kalappa took the initiative of reviving the crafts. They set up training courses and schools for Kalamkari workers, drawing on skills of the few remaining Kalamkari workers. The Srikalahasti Kalamkari Kala Karula Sangham in close collaboration with Dastkar Andhra and the Crafts Council of India contributed in bringing innovation. They brought in a more diverse colour palette and fresh stories from recent times.

At present the traditional techniques are being replaced by digital techniques. With the emergence of machine looms and printed textiles, the market presence of the textile has declined. Kalamkari artists have challenges ahead because machine printing, digital printing and mass production is on the increase. Only consumers with knack for crafts appreciated the efforts while others disregarded the authentic artisanal product as an overly priced good. A typical kalamkari cloth can last years without tearing. While this is bespoke of its quality, unlike other consumer products it leads to less chances of repeated sales.

However, the blend of modern trends and cultural lineage has been able to grab the attention of the new generation.The art thrives by global sales through this recognition. There is also a rise in experimentation along with other traditional crafts of the region, in an attempt to keep the craft relevant.

What was a fabric, depicting stories of the gods and goddesses to entertain the common man, over time became one of the most valued pieces of cloth across the ocean. The journey of this textile far surpassed its humble beginnings. It held power unimagined, gained prestige across the globe and was cherished by people of varied cultures. Kalamkari brought together the world in it’s appreciation for this intricate, elaborate craft and tied people separated by seas in their mutual reverence for this cloth. The story of Kalamkari has had its share of ups and downs, but right now it is the future that is at stake.

For a society that aspires to become environmentally conscious, we only have to look back at the sustainable practices of our ancestors to draw inspiration from. The stories of our crafts are also the stories of mindful conscious practices of the past that produced such legacies. While mechanization is an inevitable part of evolution for betterment, the importance of preserving intellectual and indigenous skills that are held in our crafts cannot be overstated. It is thus time we find harmonious, sustainable ways of doing so.