Textiel Factorij and Lloyd Hotel & Cultural Embassy have set up a long term collaboration, in which we organize various activities. In the past two months we organized a workshop, film premiere, an artistic dinner, a guided tour and an exhibition.

‘Kalamkari Tales’, are wall hangings created by artist Ruud Lanfermeijer using the age-old craft of hand blocked cotton printing, Kalamkari, which is practised only in some places in India. The Dutch East India Company imported chintz to the Netherlands in the 17th century, where it was used for regional dress, bedlinen and wallhangings. Ruud depicted the making process of kalamari, in which all the artisans involved are recognized for their skills. Starting point of the designs are live drawings that he made of the artisans during the performance of their craft. 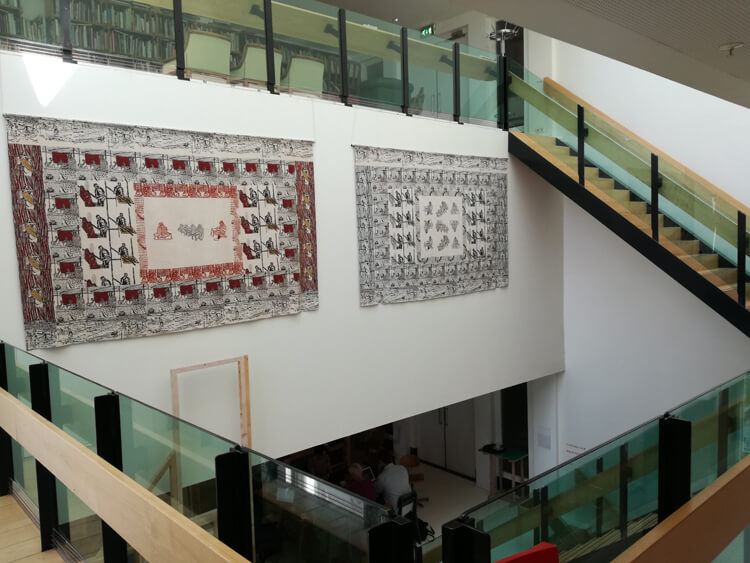 Jenne Sipman and Shradha Jain followed Dutch artists and designers collaborating with Indian craftsmen, making contemporary work. The documentary has various layers and tells the story of cross-cultural collaborations, a historical perspective on how textile merchant Gerrit Claeszoon Clinck gave assignments and collaborated with the local craftsmen at the Coromandel Coast in the 1680s. But is also tells the challenges Indian craftsmen encounter, while competing with faster production processes. The documentary can be seen in a cabin at the entrance of the Lloyd Hotel.

After the premiere, we held two Q&A sessions. The first between Jenne Sipman and Nandini Bedi.
The second Q&A was between Meeta Mastani, Indian designer from Bindaas Unlimited and Marlies Visser and Lipika Bansal.

On platform 3 of the hotel, an exhibition was at display from the 8th till 24th of July. Designers Marlies Visser and Meeta Mastani showcased their collaborative work as well as artist Marloeke van der Vlugt. On the day of the guided tour, Marloeke had set up an interactive installation, using sensors with Bandhani technique, giving the participants a multisensorial experience, with sound and video. Also designer Sujata Majumdar was present, she showcased her blocks, which she developed in a fablab using lasercutters.